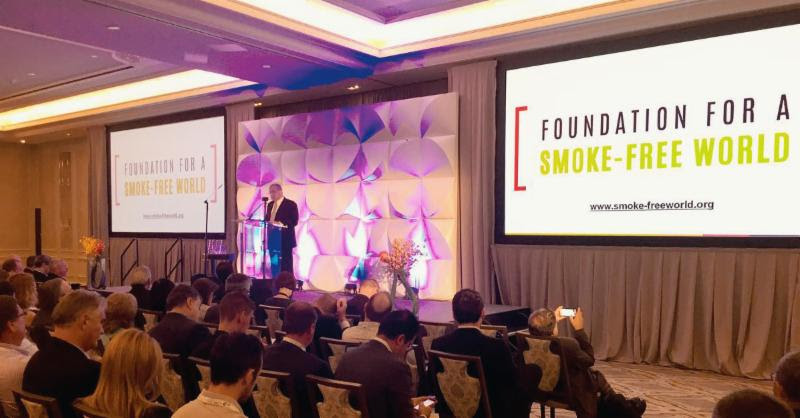 This week, Dr. Derek Yach, officially launched the Foundation for a Smoke-Free World. Dr. Yach is a well-known anti-smoking crusader who, among other things, once served as cabinet director at the World Health Organization (WHO) and led their Framework Convention on Tobacco Control. His work "helped impose advertising restrictions, tougher anti-smoking laws and higher taxes on cigarettes."(*) While not exactly a vaping advocate, Mr. Yach is nonetheless an ally.
Among its formally stated goals, his new foundation hopes to "fund studies on the impact of reduced-risk products on health outcomes, (scrutinize) activities of the industry and alternatives for farmers facing reduced demand for leaf tobacco." (*) It has already managed to secure "initial funding of approximately US$80 million annually over the next 12 years", courtesy of Philip Morris International (PMI). (*)
The foundation has emphasized that neither PMI nor "other tobacco industry representatives" will be involved in nor have influence over its "funding decisions, strategy, or activities." (*)
But this hasn't stopped some vapers from raising a skeptical brow.
Why would a Tobacco Giant like PMI give a billion dollars to the Foundation for a Smoke-Free World?
In a recent newsletter to subscribers, Aaron Biebert, the director of the acclaimed documentary "A Billion Lives", goes into some of PMI's possible motivations.
Mr. Biebert rightfully points out that the tobacco industry has been (and continues to be) under attack by multiple stakeholders, including well-funded anti-smoking organizations, the media and the public.  Although Big Tobacco has funded its own research for decades, the appearance of bias makes any of their "in-house" research easy to dismiss. This is the case even if said research happens to confirm the known and exorbitant harm of their own products.
As an independent non-profit headed by a renowned anti-smoking advocate, the foundation's research will surely be more difficult to dismiss.
Big Tobacco is well aware that combustible cigarettes will, at some point, cease being a mainstream product. Smoking rates continue to decline, and combustible cigarettes become less and less desirable by consumers. (*) It is in Big Tobacco's interest to pursue smoke-free products, and several have already added some type of vapor product to their lineup.
PMI has even gone a step further: it has "openly declared that their goal is to stop selling cigarettes." (Biebert, 2017) They have already sold more than 3 million of their heat-not-burn device, the iQOS, in Japan alone. (*) Regardless of the purity behind their intentions, PMI's donation could be viewed as a long-term business strategy.
The foundation has not stated that it will pursue research into any one specific type of reduced-risk product. Even so, if they do end up funding studies related to vaping and vapor products, PMI's association to the foundation makes vapers leery. Will such research be dismissed by naysayers who are already more than happy to unfairly lump vaping and smoking together?
With that being said, we remain cautiously optimistic over the creation of this foundation and will watch its output carefully.
Why? The truth is that a lot of rigorous, independent studies into smoke-free products, especially vapor products, is desperately needed.
Over the past several years, vaping has exploded into the mainstream. Britain's esteemed Royal College of Physicians has firmly endorsed vapor products as a safer alternative to combustible cigarettes. (*) And still, it seems that not a month goes by without a misleading (or downright false) headline making the rounds.
Despite all of the sensational misinformation, vapers have found several influential allies in medicine, government and the media, and groups like CASAA, SFATA, and others tirelessly fight to defend vapers' rights. But, we need many, many more to join them in order to ensure that adult smokers looking to quit are able to switch to life-saving vapor products well into the future.
We can not accomplish this without sensible legislation, and we can not hope to pass any legislation without setting the record straight on the benefits of vaping first. We need a multitude of independent studies to backup what any vaper already knows from their own experience: that vapor products are infinitely safer than the stinkies and that they work.
And, here's the bottom line: although the FDA may have recently delayed implementation of some of the deadlines within the Deeming Rule, unless the FDA decides to scrap or re-do most of it, the results will be the same. The US vapor industry as we know it will be snuffed out.
So, we hope - if cautiously - that Dr. Yach's Foundation for a Smoke-Free World will help fuel the kind of research that vaping needs immensely. Like Mr. Biebert put it, we hope it's enough so that "nobody will be able to say 'we don't know' anymore." (Biebert, 2017)
Not just rights and livelihoods, but lives are at stake.
SOURCES
Biebert, Aaron. "Derek Yach's new foundation to support harm reduction research." 14 Sept. 2017: 1. Digital.
Current Cigarette Smoking Among Adults in the United States
Foundation for a Smoke-Free World Official Website
Philip Morris pledges $1bn to stub out tobacco smoking
PMI CEO talks about phasing out cigarettes in Japan & S. Korea
Royal College of Physicians Says E-Cigarettes Can 'Prevent Almost All The Harm From Smoking'
Why is Phillip Morris spending $1 billion to end smoking?
Previous Post
Next Post