Just in! The ZMAX by Sigelei - Variable Voltage/Wattage with OLED Display 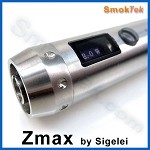 The ZMAX Advanced Personal Vaporizer by Sigelei is sleek, powerful, reliable, full featured and very well built. With this new device, Voltage or Wattage is variable 3-6 volts or 3-15 watts respectively, using a single 18650 or two 18350 IMR batteries with the included extender cap. Check atomizer/carto resistance and battery voltage too!
Rev. 3 Zmax has a menu item (#8) which enables you to switch between RMS and mean value voltage monitoring.  The RMS mode is more accurate because it samples the output voltage repeatedly while it is powering an atomizer or cartomizer.  It is with these measurements that it is able to adjust for heat related Voltage drift.
Read More 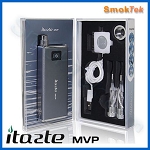 The iTaste MVP lets you adjust voltages from 3.3 volts to 5 volts, comes with one of the most powerful batteries to be featured in a device. It's built-in lithium-ion polymer 2600 mAh also works like a power bank, so it will charge any USB or micro USB device as well as an iphone or ipad. The iTaste MVP uses a pass-through charging system, which means you can charge and vape at the same time.

MVP stands for “mobile variable power”. In my opinion, the iTaste MVP is also the “most valuable player” in all Innokin products...

The new Rebuildable Telescope is a mechanically switched, vented tube mod that can use flat or button top Li-ion, IMR or NiMH batteries in varying sizes including 16340,18350,18490, 18500, 18650 Li-ion and 4.8 NiHM battery. The Kick by Evolve will work great with the Telescope APV.  It is made of polished stainless steel. Ventilation slots are added for greater protection and are nicely milled, no sharp edges.
Read More 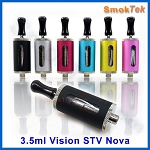 The newest version STV Nova Tank Clearomizer is designed with the same exchangeable long wick coil heads as the Vivi Nova, which wicks E-liquid much faster than the older versions. New with this version is the windowed tube for easy viewing of the liquid level! The tube is aluminum with non-leeching inner tube. It is very easy to maintain and clean the STV Nova. It holds about 3.5ml of e-liquid, though we don't recommend filling over about 3ml.
Read More

SmokTek's new Knowledgebase is full of answers to your E-Cig, APV and accessory questions. You'll find tips and tricks to make things easier, get more use of and greater satisfaction from your device.

SmokiPedia is a work in progress and we could use your help with filling it out more. If you have a question or issue that isn't listed, not answered to your satisfaction,  please leave a comment here or email us so we can get it answered and posted, this will help others in the future.

We're also looking for volunteers to help with new topics, articles and videos.  If you have an interest in helping build the most complete source of information available to new e-cig users, please get in touch soon.  Check out SmokiPedia now!

We're here to help you quit smoking, folks!
From beginners to cloud-blowing advanced users, we provide courteous help and quality product you need to succeed. Our website provides a huge selection, super fast same-day shipping and 5-Star customer service (based on over 39,000 reviews).

Established in 2011, SmokTek LLC was founded as a result of a life-changing event, I quit smoking cigars after 35 years! I did it because I decided to try the E-Cigarette to see what the hype was about. After getting a good one (not the cheap disposables) and a few flavors of e-liquid, I was amazed at how my cravings subsided. I had my last cigar 4 days after starting vaping! True story folks, this is truly a wonderful thing to experience for yourself!